This article is about Omega (2010 web series). For the official show, see Omega (Web Series).

Omega (2010 Series) was the original attempt at the series before being rebooted in 2016. The show was also referred as "South Park Omega" by the creator due to its animation style.

The original conception of the show began in December 2007, and it's inspiration came from a plethora of animated TV shows and movies.

Original Description of the character and setting (2009): Devon Hawkins, was an average young adult living in the futuristic city. One night at his college he had to do a research paper for his Literature class. So he went to the local library. While doing research he stumbled upon an old ancient book imprinted with the "Ωmega" symbol. He opened the book to find empty pages. The book started to glow and the Ωmega symbol on the front disappeared. He then noticed the exact symbol was on his t-shirt. The next day he found that every t-shirt he wore, the symbol would be imprinted on them as he wore it. Not long after all this, he started to develop superpowers. Such as shape shifting. He could copy the abilities of others. However he is not the only person with this ability. Others have found different versions of the book Devon has found. Each have different Greek alphabet symbols and different abilities. The closest enemy and who shares the same abilities as Ωmega, is λlpha. Hes Ωmega's sworn enemy and the two share opposite views on the world. It is unknown who or what created the books that gave away these abilities or for what reason they exist. To this day still hopes to uncover the mystery.

There was initially no direct design or style that inspired the show itself. Most of the shows look was a random collection of rough drawings. Devin's look, however was inspired by many characters. His facial features and hair style was inspired by Theo, from the Michael Turner Comic "Shrugged" [2] and costume was influenced by Sora from Kingdom Hearts II (2005). Some buildings and technology were influenced by Star Wars: Episode II – Attack of the Clones (2002).

Original Episode 1. This is also the first animation JTmovie created.

The first episode was conceived of between December 2008 and February 2009. Due to inexperience with the program Flash 8, the episode was postponed until the following year after JTmovie took a brief animation course in High school. The final attempt at the episode took a total of two weeks to make. This episode was not a "pilot" in anyway. Random characters make an appearance and it has little to no resemblance to the show as it's presented today.

The plot revolves around three heroes, Omega, Jet Pack and Heatstroke, trying to prevent a rocket bomb from destroying the city on New Years Eve. Three bikers attempt to prevent their goals. The main villain is revealed to be Alpha (Alex), who wants to blow up the city and rule over the remaining rubble. Omega and Alpha fight, while the bikers are taken out by Jet Pack and Heatstroke. The bomb launches off, but Jet Pack flies up just in time to reprogram the missile into space. A disappointed Alpha gets away.

Original Episode 2. This episode was made shortly after the first episode in March of 2010. A lot of new designs occurred for much of the city and characters.

The plot mostly consist of Devin following one of the bikers (Trask) from the previous Episode, hoping he can lead him to Alpha. Devin is then lead to an underground cage match. Devin challenges Trask hoping to get information. The two fight, but Trask won't give up. He leaves into a secret room where Devin follows him again. In the room Devin finds himself trapped at the clutches of a mysterious vampire-like villain.

Episode 5 was the first animation made with frame-by-frame animation. The story follows the events from Boat Chase as Omega hunts down Tec for a final confrontation. The episode also features a biker subplot with Trask vs his former gang leader, Zeke.

Episode 6 is the final episode before the major reboot in 2013. The episode opens with Devin retrieving cargo from stolen criminals. As he's trying to land the hovercraft, he accidentally bumps his head on a pipe and awakens in a hospital. Devin, for some unexplained reason is unable to use his powers. He is told to remain there until they can figure out whats causing that. Each night he is awaken by a child who wants him to enter through a white door way. The climax reveals all events in the episode were a dream brought on by a sinister doctor who was testing on children and Devin. This episode is the first time we see Max, and Alpha makes an appearance in one scene. 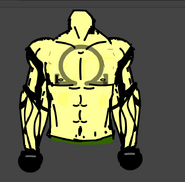 Add a photo to this gallery
Retrieved from "https://omega.fandom.com/wiki/Omega_(2010_Series)?oldid=1114"
Community content is available under CC-BY-SA unless otherwise noted.